Valparaíso – The Cultural Centre of Chile 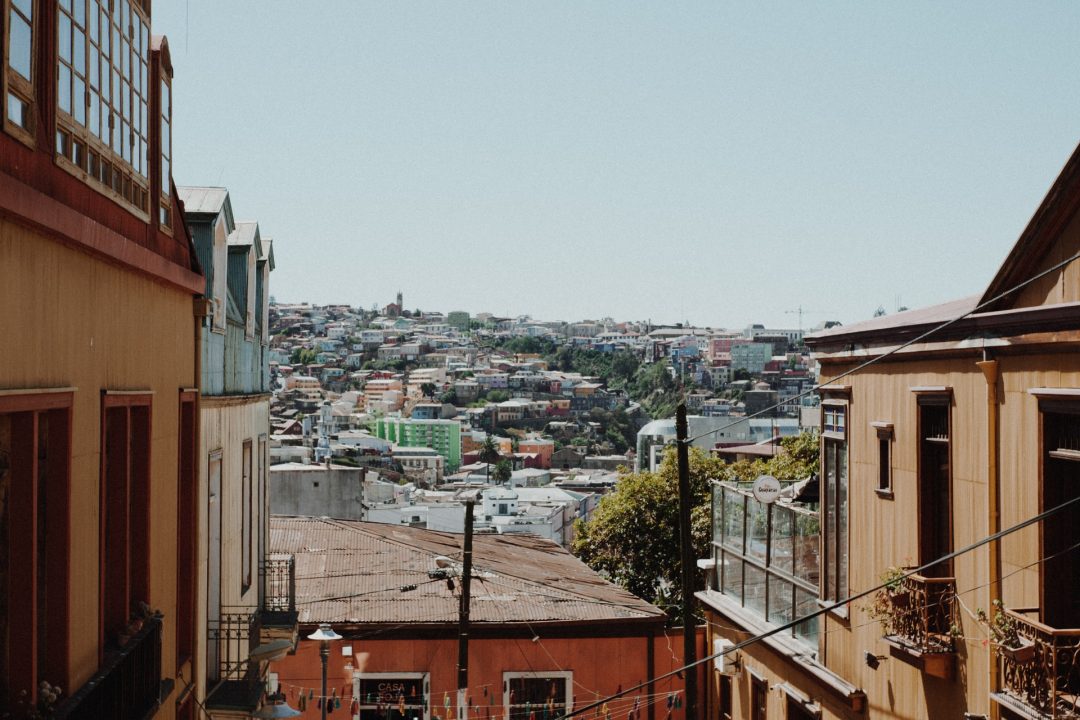 Valparaíso – The Cultural Centre of Chile

Valparaiso (or Valpo, used by the locals) is also known as “The Jewel of South America”.

The famous Nobel prize-winning Chilean poet and politician – Pablo Neruda, wrote in his ode: “What nonsense you are, What a crazy insane port.”

Have we got your attention? If so, let’s dip-in into the colourful palette of Valparaiso. Famous with its dramatic history, street art, vivid buildings, stunning beaches, delicious seafood, and many many more, Valpo is the cultural heart of Chile.

Valparaiso city, the capital of the Valparaiso region, is based only about 120 kilometres north-west of Santiago, which is approximately 1.5 hours away by road, and it is a must-visit if you are nearby.

Its location on the Pacific coast makes it a perfect choice for ocean lovers and enthusiasts. Keep in mind that like most of Chile, Valpo is liable to earthquakes. There have been a few disastrous ones, but this hasn’t stopped the city’s reviving and progressing.

At the moment, Valparaiso is the 5th main city in Chile, known for its important seaport, and has a population of 282 448 residents.

What is the history of this place?

Presumably, the first inhabitants of the bay of Valparaiso are the Picunche natives, recognized for their agricultural skills, or the indigenous Chango people, who were experts at fishing, handling, and using the resources of the sea.

In 1536, Valpo was found by the Spanish conquistador, Juan de Saavedra, who named the town after his home village, Valparaiso de Arriba, in Spain.

During the 19th century

In 1810, an independent trader built the first pier in the history of Chile.

During the War of 1812, the Battle of Valparaiso also called the Capture of USS Essex was fought between American and British navy ships. On March 28, 1814, the USS Essex of the United States Navy was defeated by the British frigates HMS Phoebe and HMS Cherub of the Royal Navy.

After Chile achieved independence from the Spanish colonization (1818), beginning of the Republican Era, Valparaiso started to develop slowly. Its harbour became a major and desired stop and opened for worldwide market and business opportunities that had been restricted to Spain and its other colonies in the past.

In 1827, El Mercurio de Valparaíso was established, which is currently the oldest newspaper in Chile. Today, its building takes place where the first pier was built, as we mentioned above.

La Colonia Britannica (The British Community), bloomed in Valparaiso between the years of 1820 and 1920. Quite a few British companies were doing business in the town, which had become an important trade centre and boosted the economy of Valpo, by 1840.

Between the 1850s and 1880s, the town grew significantly. Water, safe for drinking and cooking became accessible, the first fire brigade was formed, streetlights (gas lanterns) were placed, railways were built, a telegraph and telephone services were set up for use.

As a leading seaport, Valparaiso became home to many European immigrants, mostly from Britain, Italy, Germany, France, and Switzerland. Because of that, the population increased, and due to the deficiency of available land, it was a necessity to make use of the steep hills and to build more houses and constructions for the resident’s needs.

During the 20th century

Bad times were coming for the town and the community. The beginning of the twentieth century wasn’t smooth and prosperous as expected.

The first enormous protest of dockworkers started in April 1903. They were objecting to their prolonged working hours and poorly pay rates. Their requests and appeals were neglected by the employers, which led to serious damage and consequences. Several people were shot and even killed.

A catastrophic earthquake caused Valpo’s destruction in 1906. On August 16, the city was hit by an earthquake with a magnitude 8.2 Mw, destroying almost everything of Valparaiso, and causing severe damage even in central Chile.

According to reports, the losses were extreme. With an estimated 3.800 dead victims, over 20.000 injured, and approximately $100 million property damage, this was certainly the greatest disaster in Chile’s past up to this date.

Public places like cafes, shopping stores, theatres, and many more were demolished.

After cleaning and removing the debris, rebuilding and reorganization work began.

In 1914, the opening of the Panama Canal caused an immense reduction of Valparaiso port’s use, which led to a big fall in the city’s economy.

During the 21st century

Over the first fifteen years of the twenty-first century, even though there were ups and downs, Valparaiso managed to recover and to draw the attention of many artistic entrepreneurs and musicians, who decided to settle up around Valpo’s districts.

The port’s use and shipping increased and continued to be a major transportation centre for container transit, receiving or sending goods like fruits, copper, textiles, oils, and more.

Today, the interest keeps growing among the thousands of tourists from all around the world, coming to see and live the lucid bohemian side of the city.

Valparaiso converts itself truly into a major educational centre with some large and recognizable universities and colleges.

As a main cultural centre of Chile, Valpo encourages and upholds regularly a variety of festivals and events, welcomes street artists and musicians from all over the globe.

What to See and what to Do in Valparaiso?

There are plenty of amazing places and a range of different activities for everyone’s preference and taste.

From food lovers to art enthusiasts, to clubbing fans, to shopaholics, to sunbathing, and “beaching” seekers – there are more than enough ideas of where to go or what to see and do.

Below, we will present to you some of the most popular amongst visitors and locals of the city.

Visiting the beaches in Valpo’s region

Being on the coast means easy access and a variety of stunning waterfronts to choose from.

Two of the most favourite and visited beaches are Viña del Mar, popular with its luxurious resorts and palm tree avenues, and Reñaca, known for its white sands and awesome waves, often preferred for a relaxing family destination.

At most of the tourist sites, there are different water and outdoor activities, surrounded by cosy restaurants, cafes, and cocktail venues, to keep you entertained during your holiday.

Take a street-art tour around the city

As we mentioned earlier, Valparaiso is well-known for its art in all styles and shapes. From graffiti prints to mosaic pieces, to paint-based drawings, all around the city’s steep hills and zig-zag streets.

It has organized street tours, by local tour-guides, giving you the chance not only to explore and admire the artworks but to participate if you wish, in creating your own spray can – graffiti. With some of them, charges apply, otherwise, there are free ones as well. 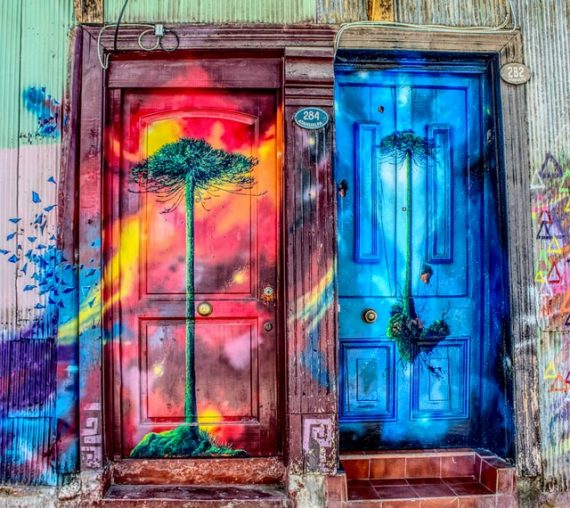 Or if you like, you can make your own tour – Just make sure you have a full battery on your phone or camera, so you can capture all the colourful beauty.

Due to Valpo’s steep nature, the residents used to climb on foot thousands of steps, until they reached their homes. So to ease the travel, elevators were built between the end of the 19th and the beginning of the 20th century.

They are cheap and fun to ride, and a perfect choice for those not fancy a hike, or for people with limited movements.

If you are a fan of fish, crab, and clams – you are in the right place. Valparaiso’s coast cuisine and markets are beloved for their fresh seafood.

You can buy it directly from the fishermen around the port, or you can visit some of the lovely restaurants with dazzling coastal views.

If all these ideas weren’t sufficient, you should check-out some other activities.

If you are curious about history, there are many museums in the area. Or go on and explore Valpo’s shopping centres and artsy stores. There are plenty of unique local hand-made souvenirs, wood, and leather crafts, jewellery, and more. And don’t forget about the bohemian and vibrant nightlife of the city. It offers a diversity of different things to do and gives you an unforgettable experience. You can visit live music events, or you can enjoy sipping on some Chilean wine or local cocktails 🙂

How to get to the city of Valparaiso?

Valpo doesn’t have its own airport, but the closest one is Arturo Merino Benítez International Airport in Santiago.

You can catch a train, or you can go by car, but bear in mind that it might be a bit difficult to drive in the city, due to its highway surroundings, but generally, it is all in good condition.

Other options are public buses. They operate from a wide range of destinations within Chile, helping to serve the people travelling from and to Valparaiso. 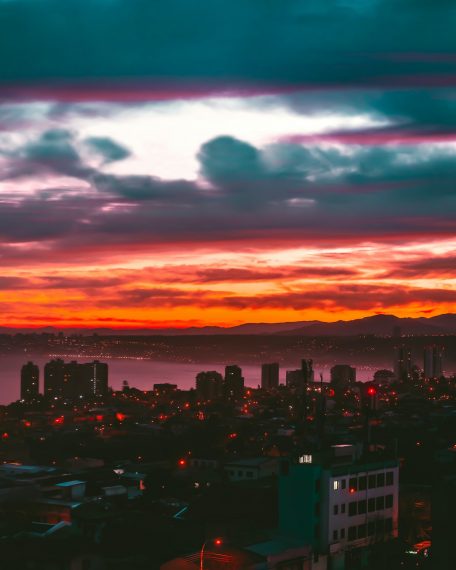 ★ Last Safety tip: Like many other places around the world, crimes occur

around the Valparaiso region as well. Be aware mainly of pickpockets and do not leave your bag or purse unattended. Avoid displaying expensive jewellery or accessories. Violent crimes are usually uncommon, but simple precaution measurements should be taken. Make sure to keep a note of some local taxi services if you need to catch it during the night, or in case you feel unsafe.

We hope you enjoyed our article, and for the moment – Stay Home, Stay Safe!

And you have to visit the amazing WineBox hotel. It’s set on a hillside overlooking the city. Great rooftop deck, cool rooms. They even make wine on the premises!