Dear readers, We hope you are safe at home and ready for our next virtual tour, as today we would like to show you another “gem” in the capital of Chile – Cerro San Cristobal.

The hill itself rises to about 880 meters, which makes its peak the second-highest point in the city. It is located in the northern part of Santiago and its also home of the biggest urban park in the area – Santiago Metropolitan Park (Parque Metropolitano).

So, be prepared to discover some marvellous panoramic views and amusement attractions through our “walk”, including a funicular, a cable car, a zoo, beautiful gardens and many more.

What are the historical moments of Cerro San Cristobal?

The original native name of Cerro San Cristobal was Tupahue in the Quechua language, before receiving its name after Saint Christopher during the Spanish colonization.

A very interesting fact is that back in the year 1903 the summit of San Cristobal hill got its very first building installed – The Manuel Foster Observatory. It was constructed by the University of California, and it’s a twin of their Lick Observatory.

Foster became the first international astronomical observatory build in Chile and since then has been used for many different types of research, measurements, and studies. In 1980 began some reconstructions and renovations but in a way that it did not affect its historical nature. 30 years later, The Manuel Foster Observatory has been announced as a National Monument in the category of Historical Monuments.

Another favourite attraction among the tourists and the residents of Santiago is the statue of the Blessed Virgin Mary (located at the top of Cerro San Cristobal) also known in Spanish as Virgen de la Inmaculada Concepción, dedicated to the Immaculate Conception. It weighs approximately 36,610 kilograms and it is 14 meters tall. It is believed that the memorial is a reproduction of the “Virgin of Rome”. At night time the statue has been lit up by lights surrounding it, so the spectacular view can be admired from all over the city.

The Sanctuary of the Immaculate Conception consists as well of a small chapel where Pope John Paul II blessed the city of Santiago on April 1, 1987, and an amphitheatre where church services and religious rituals are held.

If you are more person of action, seeking for other variety of activities (ideally around nature), rather than astronomy and historical monuments – keep reading because San Cristobal Hill has more to give.

Dwelled in the foot of the hill, the Chilean National Zoo is a home for over 1000 animals of 158 different species including rare and endangered ones. The zoo has its own veterinary clinic, nutrition center and presents a range of educational activities and exhibits. There is even a Cinema Zoo where you can watch interesting documentaries about the animal kingdom.

For the lovers of the flora, there is a Japanese Garden. It has been closed for 2 years due to renovation, but it re-opened doors in January 2019. There, you can find beautiful lotus flowers, cherry blossom trees, bamboos and more.

If you like swimming, there are two outdoor pools located on the top of the hill – (Spanish: Piscina) Tupahue and Antilén, with a breathtaking view over the capital and both open to the public. They are equipped with sunbeds and green paths to lay down, wardrobes, showers, and snack bars.

And if all that hasn’t been exciting enough, alongside the hill there are lovely picnic areas, children playgrounds, sports activities including an outdoor gym, hiking trails, delicious and cute food/drink stalls, and many more. 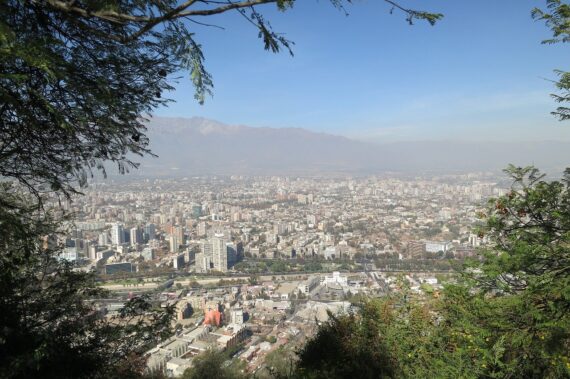 How to get to San Cristóbal Hill?

There are a few different ways to get to the summit of Cerro San Cristobal.

The Santiago Cable Car consists of 47 cabins that can carry up to 6 people in each, plus 8 extra modules for transporting wheelchairs, bicycles and maintenance tools. It runs up for almost 4 kilometres and the journey lasts about 15 minutes. The renovated cabins are fully equipped with a ventilation system, heating and panic button in case of emergency, allowing its visitors to enjoy their ride entirely. The system operates between 3 stations: Oasis, Tupahue, and Cumbre.

The funicular railway service which also was declared as a National Historic Monument in November 2000, is a great choice for fun and traditional way to climb the top of the hill. Its route begins at the main pedestrian entrance (via Pio Nono street): the first stop is at the National Zoo and the last stop – the summit of San Cristobal Hill.

There are public buses with access to the park, or you can take a bus tour via some of the tourist companies. Consider that for the price of a Hop On/Hop Off Plus ticket you will be able to use the funicular and the cable car as well 🙂

To get to the hilltop, alternatively, you can go by walking or cycling. The nearest entrances for the hill are via Pio Nono and Pedro de Valdivia. Or you can go by car – Just keep in mind that you will have to pay a fee to get into the park with it.

Once you reach the top, don’t forget to get yourself Mote con huesillos from some of the street vendors around. That is a traditional non-alcoholic Chilean summer drink, made from dried peaches in sugary syrup and husked wheat. It is a perfect refreshment for the warm sunny days and sooo yummy! 🙂

Before visiting – plan wisely your trip. Do not forget to double-check the opening times of the attractions and public transport, especially now during the pandemic situation due to COVID-19.

We hope we have kept you entertained at least for a bit, until the next time. Stay Safe!