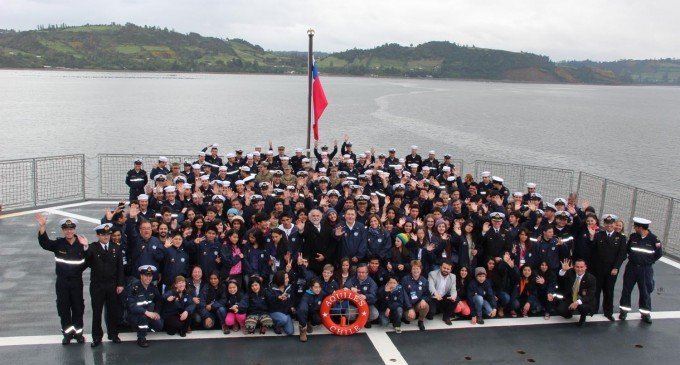 THE JOURNEY WENT ON A SHIP NAMED AQUILES, AND IT IS A CULTURE AND ART COUNCIL INITIATIVE THAT FOR A WEEK VISITED FAR LOCATIONS OF DE AYSÉN AND LOS LAGOS REGIONS.

CASTRO — With Minister of Culture, Roberto Ampuero, the Young Orchestra Journey (Travesía de Orquestas Juveniles) ended in the city of Castro. This allowed children and teenagers from the southern area to show their talent to those who live in Chile’s farthest places, specifically in the Aysén and Los Lagos regions.

The minister said, “through the program Sello Regional de Aysén, the Culture and Art Council has insisted on this historic investment to make music reach Chile’s farthest and most beautiful corners. Just like the cold wind and the blue and intense ocean of fjords and channels, we have decided that music should reach and embrace those Chileans that make up our country and dream of living in distant places”.

This unique experience of artistic access, cooperation and spreading was organized for second year straight by the Aysén Culture Council to show the work of these young local artists (aged 10-24) and bring them close to those who do not have the chance to enjoy this kind of performances.

This journey gathered around 1,500 people who enjoyed the performance of lyrical singers such as Carolina García Valentín and tenor Miguel Ángel Pellao, one of the novelties in this second edition.

During 2013, young musicians participated in trainings, workshops and rehearsals thanks to Fundación de Orquestas Juveniles, which allowed groups to improve their performances and learn from musicians, expert in different instruments.

The Minister of Culture also said, “the Culture Council is committed to strengthening and democratizing the access to culture throughout Chile. For this, we have one of the most powerful tools, and that is the program Sello Regional. This one not only spreads culture and art through the regions, but also aims to fortify and highlight the local identity”.