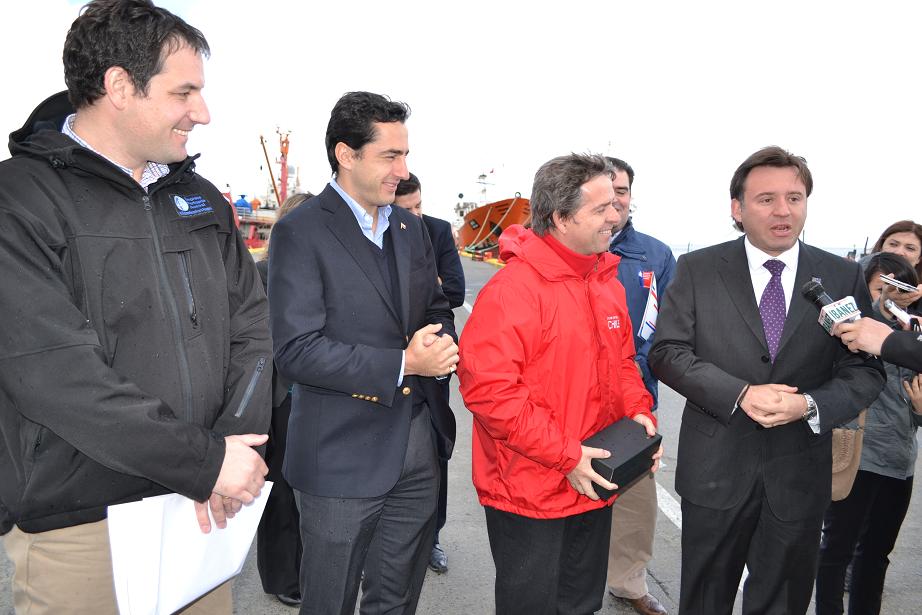 THE MINISTER OF ECONOMY, DEVELOPMENT AND TOURISM FÉLIX DE VICENTE, AND THE UNDERSECRETARY OF TOURISM, DANIEL PARDO, TOOK PART IN THE LAUNCHING OF THE CRUISE SEASON.

PUNTA ARENAS –With a tour around the facilities of the Muelle Prat in Punta Arenas, the Minister of Economy, Development and Tourism, Félix De Vicente, with the Undersecretary of Tourism, Daniel Pardo; the Governor of Magallanes Region, Claudio Radonich; and the General Manager of Austral Port Company, Ignacio Covacevich, launched the 2013-2014 cruise season.

The authorities announced a growth of 4% in the arrival of tourists entering by this route to the Magallanes Region. Altogether, it will be approximately 63,000 passengers, of which 5,466 will be national tourists.

In the event, the General Manager of Austral Port Company, Ignacio Covacevich presented to the authorities the improvements project that will be done at Muelle Prat.

The investment will amount to 13 million dollars, meaninga comprehensive improvement of construction and concession, which will allow receiving ships from up to 250 metres long and that transport 1,500 passengers, twice as much as the ships that currently reach the port.

Here, the Minister of Economy emphasized that “with this kind of advances we want to receive ships two times longer than we currently receive, therefore we want to make easier the arrival of tourists in order to avoid landing through small vessels”.

For his part, the Undersecretary of Tourism, pointed out that “between 2010 and 2014 there has been an increase of 40% of passengers, all thank to the President Sebastián Piñera Government. This, in addition to the improvements of infrastructure in the quay, will make true the dream that everyday arrive more passengers”.

On his behalf, the Manager of Austral Port Company, said that “last year the arrival of tourists by sea grew about 5%, which would mean that in 15 years we would be doubling the amount of passengers arriving. The quay with all its improvements will be operative for the 2015-2016 season”.

Eighth Wonder of the World

In the end, the Minister De Vicente addressed to the recognition won by the Parque Nacional Torres del Paine as the Eighth Wonder of the World, saying that “this week, the industry will be acknowledged in the park, to express our gratitude for the promotion job they did that, in part, allowed wining this amazing recognition that will make easier, without a doubt, increasing the tourism more than we expect in the following seasons”.