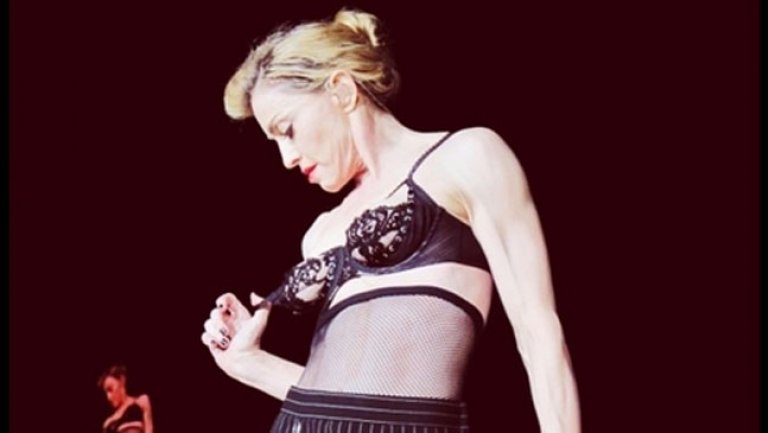 For Chilean Madonna fans, Wednesday night turned into an agonizing two-hours of waiting in the rain which, in the end, wasn’t properly rewarded.

Estadio Nacional looked like a sea of umbrellas and colorful ponchos yesterday.

Chilean fans of Madonna have been waiting for her to come back since 2008 to put on another one of her amazing shows. She finally included Chile as a part of her MDNA tour and people from all regions came to Santiago for the big day. Unfortunately, what they got was nothing short of a disaster.

Due to a freak rain storm inundating Santiago, it was almost impossible for people to get to the Estadio Nacional. Despite the event managers’ assurances that the concert would go on, many fans decided to sell their tickets at much lower prices on Facebook.

The truest fans, however, were there right when doors opened at 4:30 p.m. to be the first to welcome the Queen of Pop. They were disappointed indeed to find out that she would not go on stage on time. Rather than starting at 9:30 p.m. like it was announced (even though the tickets said 8 p.m.), the concert was delayed another two full hours.

According to reports durning an afternoon sound check, the Queen of Pop berated the Chilean crowd for smoking near her. It all started when the singer’s white umbrella became caught in the wind and got yanked inside-out, which got the crowd laughing.

It was at that moment that the Diva stopped singing and launched into the crowd about smoking.

“There are people smoking right now,” she said. “No smoking. If you’re going to smoke cigarettes, I’m not doing a show. You don’t care about me, I don’t care about you. All right? Are we going to play that game? I’m not kidding. I can’t sing if you smoke.”

“Entiendes?” she asked the Spanish-speaking crowd.

“You’re looking right at me and smoking cigarettes, like I’m a stupid f—ing idiot,” Madonna said, then stormed off the stage. Video of her glorious rant was quickly uploaded to YouTube, but was taken down once it started going viral.

Madonna finally took the stage around 11:30 p.m. “Hello Santiago, thank you for your patience,” she announced, trying to console more than 36,000 soaked and disappointed fans. Unfortunately, this wasn’t enough to calm the audience down and a wave of discontent swept over the stadium.

But the show must go on. And so it did, with impressive dance choreography, three big screens in the background, and plenty of Madonna’s greatest hits. The show opened with “Turn up the radio”, part of her MDNA album (2012). Then she laid down some of her older favorites such as “Holiday”, “Celebration”, and “Like a Virign”, in a further attempt to cheer up the crowd.

Before long, however, it became clear that the show wouldn’t last as long as the previous ones on the tour. Madonna said goodbye around 12:45 a.m., cutting her performance short by over 40 minutes.

That was the last straw that totally ruined the atmosphere and reduced the show to a massive dud rather than a glamorous extravaganza. Social media exploded into violent and angry comments about it. Endless criticism and sarcastic jokes about the “outstanding” performance could be seen all over Twitter, including:

“Fail! No more back to Chile… unprofessional and very disrespectful to her fans!” (Alvaro Basoalto)

Some of them were even angrier and visibly insulted, saying things like, “It is obvious that you don’t love your fans. They deserve some respect!” and “Gaga is the new Queen of Pop”. Ouch.

Managers defended themselves, saying that the performance was cut short because of complications arising from the rain. Madonna herself confessed to being “exhausted” and hoping for better weather conditions.

Whatever the reason, one thing is sure: Madonna fans in Chile will have a rough time forgiving her for this one.