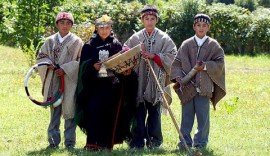 After a group of Mapuche people attempted to occupy a plot of land they consider ancestral property in Chile’s Araucanía Region, law enforcement used force to evict them from the La Romana and Montenegro forestry plantations.

Now, Amnesty International is calling for Chilean authorities to launch an investigation into the use of police force during the eviction.

The conflict began Monday, July 23 when the Temucuicui, part of Chile’s largest indigenous group, were forcefully evicted by Carabineros. According to representatives of the Temucuicui community, the group was protesting President Sebastián Piñera’s lack of support for the Mapuche struggle to regain ancestral land. About 200 police officers arrived, using tear gas, pellet guns and shotguns to drive protestors away from the site.

By the time the conflict ended, twelve people, three of whom are minors, had been detained by Carabineros. Several protestors, including at least four children, were injured during the conflict. Later, police use similar tactics to break up demonstrators who gathered outside the Collipulli Hospital, where injured protestors had been taken earlier.

Police action at the hospital protest resulted in a 12-year-old girl being shot in the back with pellets as well as a 16-year-old boy being hit in the head with rubber bullets.

This is not the first time Mapuche attempts to claim ancestral land have escalated into conflict. Numerous Mapuche communities from across southern Chile have long demanded legal rights to plots of land, frequently clashing with logging companies throughout the process. During a similar event in 2002, a 17-year-old boy was killed during a police crackdown.

Although President Piñera announced that he will investigate the role of police force in last Monday’s incident, he also claimed to “support the police action 100 percent”, according to the Inter Press Service. Piñera was also responsible for increased police presence in the region where protestors were based. According to activists, the president’s decision to augment Carabinero numbers in the Araucanía Region is part of the government’s attempts to militarize the area.

“The accounts from the forced eviction in Ercilla point to a possible disproportionate use of force by the police, and the reports of children being injured by police firing buckshot into the crowd outside the Collipulli hospital are especially worrying,” Parada said.

“The investigation into the incidents must be thorough, impartial, and independent and, if it finds that police overstepped the boundaries of the law, those responsible must be brought to justice,” she continued.

Following the publication of a “Special Security Plan for the Araucanía Region” by Chilean authorities, Parada highlighted that human rights must remain a top priority in the area.

“Whatever measures are taken to tackle social conflicts arising from Mapuche ancestral land claims in the Araucanía, human rights must be respected,” she concluded.