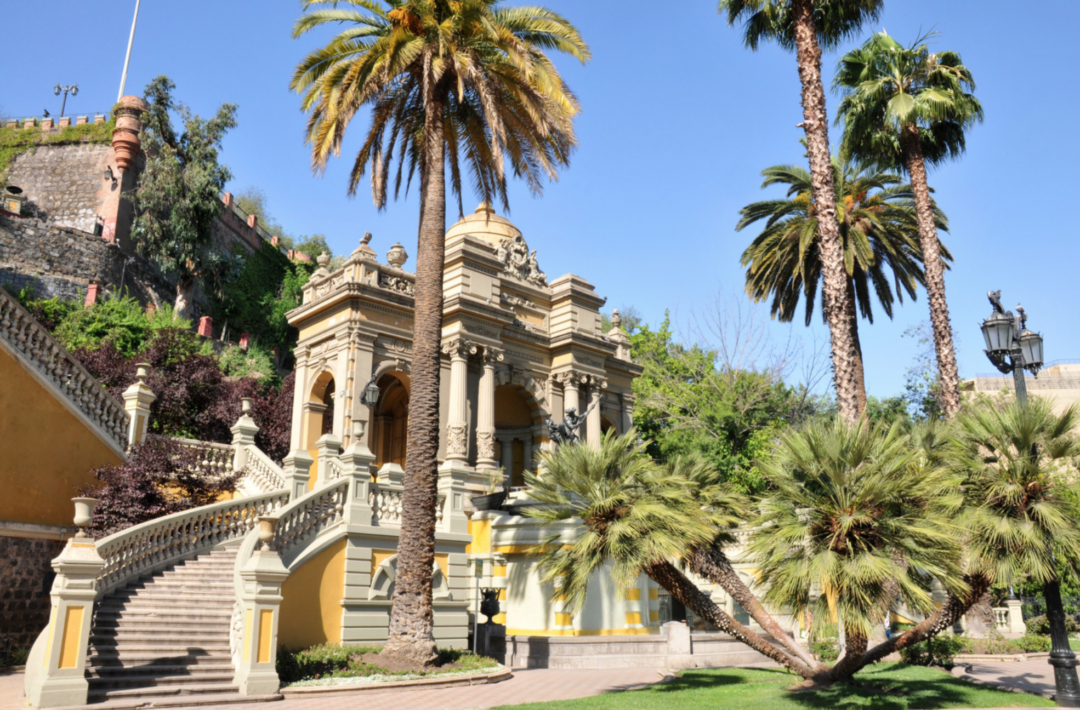 Do you fancy a thrilling walk in the park with a panoramic view, perhaps a city hike? Are you interested in history and/or arts? If so, you should keep reading this article and learn more about Santa Lucia Hill – the “oasis” based in the center of Santiago, Chile.

While the hills are not considered as the most popular tourist attractions, Santa Lucia Hill has a lot to give. It features a diverse mixture of rich history, architecture, including a castle, fountains and a stunning view over the Chilean capital.

With easy access to the park, you can boost your knowledge during an inspirational, relaxing and breathtaking walk.

What is the history of this place?

As we already mentioned, Santa Lucia Hill (Spanish: Cerro Santa Lucía) is a historical and cultural symbol of the city. It is also a remnant of a 15-million-year-old volcano. Exciting, Isn’t it?

Back in the days, the original name of the hill came from the native Mapuche language, called Huelén (which means: melancholy, pain, sadness). The place was a great spot for observation, used by the missionaries.

On December 13th, 1540, Pedro de Valdivia declared to conquer the hill. That day is known for celebrating the Christian martyr Saint Lucia of Syracuse, also called Saint Lucy. This is where the current name of the hilltop comes from.

It is safe to say that for the current look of the park, filled with elegance and charm, we can give credit to Benjamín Vicuña Mackenna’s government. In 1872, among all of his efforts and work to improve the city, he decided to reconstruct and modernize the hill and turn it into a beautiful public park, and to honor its importance in the city’s history.

How to get to Santa Lucía Hill?

There are many public buses, hop-on/hop-off bus tours, and metro stations nearby at reasonable prices. It is also just a 15 min walk from Plaza de Armas. The closes tube stations to the park are:

What are the opening hours?

Santa Lucia Hill welcomes visitors every day, between the hours of 9 AM – 7 PM. The best part is that there is no entrance fee and it is absolutely free to visit. However, you might need to sign-in, before you enter the premises, so don’t forget your passport.

What can you see at Santa Lucia Hill?

Today, the hill covers 65 300 square meters of green area, with 69 m of height. It is decorated and enclosed by a fascinating variety of tree species, historic cobblestone pavements, fountains, monuments, delightful “green” terraces and more.

Also, If you are looking for some original gifts, souvenirs or Chilean crafts, then you should check out Santa Lucia Market, which is just across Santa Lucia Hill. You will love it 🙂

It is now time to mention some of the “must-see” tourist attractions in the park.

The Fountain of Neptune, also known as Neptune Terrace is a monumental fountain located near the entrance of Santa Lucia Hill. It was built in the early 1900s with a neoclassical design and dedicated to the Roman God of the seas, Neptune.

The emblematic El Castillo Hidalgo is a building, placed on top of the hill.

It was built in 1816 by the arrangement of the Chilean governor, during the Reqoncuest to serve as a stronghold for the defense of the capital and known by the name of Santa Lucia Battery.

After the country got its independence, to commemorate this iconic moment, the castle was named after captain Manuel Hidalgo, who had fallen in the Battle of Chacabuco. Since 1997, the building has undergone a series of renovations that made Hidalgo Castle currently one of the most popular event centers in the city of Santiago, where people can use the castle for exhibitions, weddings, graduations and gala events.

There are many sculptures in Cerro Santa Lucia, installed more than over 100 years ago. One of them is the statue of Caupolicán – a famous Mapuche leader and Araucanian warrior, who withstand against the conquistadors during the 16th century. The remarkable work was made by the sculptor Nicanor Plaza. Because of the gorgeous atmosphere and amazing views over the city, the Caupolicán terraces make one of the most favorite locations in the park.

Quick Tip: Bear in mind that the way up the hill is not a long-distance, but might be too steep at some parts. So if you have a loss of mobility, or just want to skip the walk, there is an elevator available in the park – just make sure to double-check the opening times in prior, And don’t forget to wear comfy shoes. 🙂

If you liked this article, please give a LIKE or SHARE – it means the world to us! 🙂