Whatever we say about Puerto Varas will not be enough for sure. You know there are some places on earth where the words are not enough to describe what the eyes can see. That’s the case with Puerto Varas a.k.a. “La Ciudad de las Rosas”.

In case you plan to visit Chile, “The City Of Roses” is a must-visit destination for you with its location at the shores of the second biggest lake in Chile – Llanquihue.

The area is blessed by nature with an unforgettable, breathtaking view of the magnificent Osorno Volcano. This way said it’s understandable why the place is a top destination for the tourists.

In this article, we will try to guide you through some of the key points of your journey called “Puerto Varas”, so let’s go.

Part of the Chilean Los Lagos Region, “La Ciudad de las Rosas” is a town in the southern Llanquihue Province. With a population of over 41 000 inhabitants, the city is just 20 km (12 miles) away from the capital Puerto Mont. The area is well-known for its German traditions and architecture.

In 1853 the Chilean Government launched a colonization project in the area. The German revolution from 1848-1849 was the primary source for the Government to increase the population of Puerto Varas.

With the first 212 German families, now known as the “German Chileans”, the town was founded and named after the Minister of Interior – Antonio Varas.

Can’t deny it, the Germans who expected to be political prisoners in the German Confederation were lucky to be blessed with a home with such natural goods and breathtaking landscapes.

As we already mentioned in our previous articles, the Llanquihue lake is one of the most notable and essential places in the Los Lagos Region. The second biggest lake in Chile spreads over an area of the impressive 860 square kilometres or 330 square miles. That’s big right?

If you plan to visit the lake for fishing or crossing it with a boat, get yourself ready to be amused by the spectacular views of northern Patagonia. The Llanquihue lake is responsible for making the three towns suited around it – the most popular destination for the tourists. 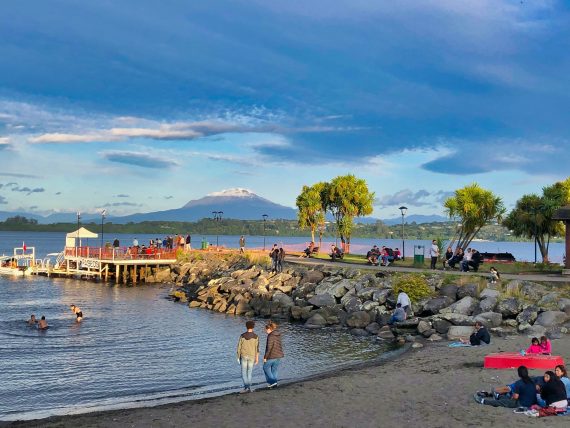 The power of nature is highly projected with the 2,652 meters or 8,701 ft tall canonical “Osorno Volcano”. Combined with the endless view provided by the lake, Osorno rises with all of its magnificence to become Los Lagos’ emblematic symbol.

The Chilean history remembers 11 eruptions of the Osorno Volcano, which formed the big guy, standing on top of its predecessor 250 000-year-old La Picada.

Osorno’s snowy top makes him look so much like Mount Fiji. The stratovolcano stands between the Llanquihue and Todos Los Santos lakes in Chile.

The climate or what to expect from Puerto Varas

As you might already know, the summer in Los Lagos Region is not so hot due to the Oceanic Climate that covers the south part of Latin America. If you plan to visit “The City of Roses” between June and September, the temperature gets no higher than the 12.4 C (54,3 F).

From October to March, things get a little better if you prefer the hotter weather. With a maximum of 19.5 C (67.1 F) in January, you can leave your jacket at home. No matter what time you chose to visit the Llanquihue lake and the area, don’t forget your waterproof jacket.

Last, but not least don’t forget your camera and to capture your moments, because every second spend in Puerto Varas and the area is worth it.

Thank you for reading!