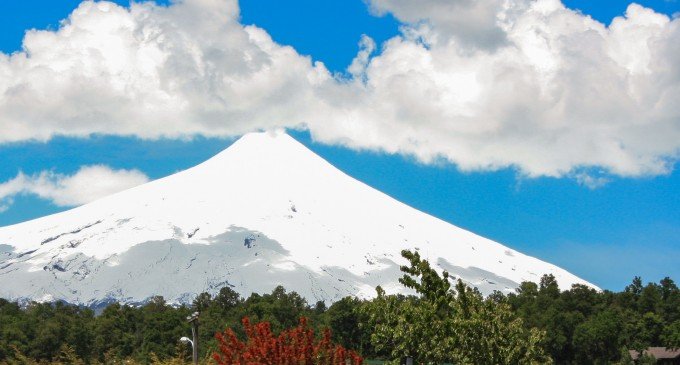 I SPENT ONE OF THE MOST BEAUTIFUL WEEKENDS OF MY LIFE IN PUCÓN WITH A GROUP OF FOREIGN STUDENTS, ORGANIZED BY THE COMPANY SANTIAGO EXCHANGE.

PUCÓN –Rafting, a walk to see an improbable waterfall, going in a thermal bath during the night with a water of 45 degrees while it’s raining, Mapuche ride, admiring a sunset on the lake and climb onto a volcano during 6 hours and going down sledging, it’s definitely the best weekend ever!

Santiago Exchange is an organization that makes the stay of foreign students in Santiago easier and more exciting. They purposed many activities, parties and trips in all Chile. Thanks to this organization I went to Pucón and spent 3 days in the lakes area. We were a group of 11 foreign students: Spanish, English, Chilean, Italian, and French, with the same wish: enjoy our weekend in this unknown place. Pucón is located in the Cautín Province, Araucanía Region, 100 km to the southeast of Temuco and 780 km to the south of Santiago.
We spent the Thursday night in the bus (more or less 7 hours) and we arrived in a sleepy town which looks like to a Swiss city with wooden houses and mountain shops, surrounded by lakes. But when we drunk a hot milk chocolate in a Swiss restaurant, the cake with “dulce de leche” remind us that we were undoubtedly in Chile! 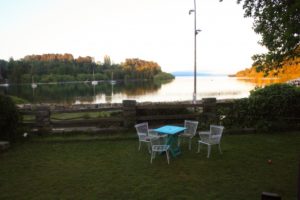 We arrived to the hostel “Chilikiwi” (the website is coming), managed by a New Zealander and a Dutch. The hostel is a big house with shared bedrooms (but also “matrimonial room”), a garden with a lovely viewpoint on a lake. In a rainy mood we visited the village and other beaches with black sand, shopping streets but we were almost the only tourists at this period of the year. After a delicious hamburger in Latitude 39, managed by Californian people, we decided to do rafting. It was epic! After two days of rain the river Rio Grande was unbridled, with waves of 1.5 meters (hopefully I wasn’t in the first row!) so of course we got rained on by the cold water of the river but it was very fun! Despite having frozen hands and feet we loved taking on the waves and scream with frenzy. 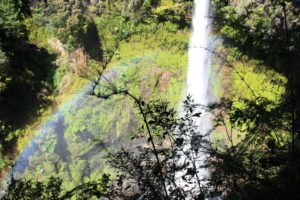 What a wonderful idea to plan a “thermal night” after a frozen activity like rafting! At 9 p.m. we went to the thermal baths “Los Pozones”, while it was raining we were in water of 45 degrees -but to be completely honest, at the beginning I couldn’t enter the water because it was too hot-. These mountain springs are famous for their natural pools made of rocks in a rustic style. There are 7 pools of different sizes and temperatures, varying between 30 ° and 42 ° C. Liucura River runs beside the hot springs, which makes it possible to change temperature for a few minutes diving in the river.

On Saturday we woke up earlier to have a walk in the camp of Pucón to see the waterfall “Salto el Claro”. It is located only 6 kilometers from the town. To reach it you have to follow the international road to the area of the “dungeon”. While it is one of the highest waterfalls of the place, with 90 meters, it’s not as well known by tourists. But that was the goal, discover on our own.

In the afternoon we did a “Mapuche ride” in the mountain. It’s a walk in the heart of the reserve Mapuche and its mountains, achieving unique views over the lake and the volcano Villarrica, meet customs and ways of life of the Mapuche in the area. The tour begins with 1 hour ride through the Mapuche reserve . At the bottom of the valley begins the ascent of the mountain Quelhue that lasts 45 minutes. 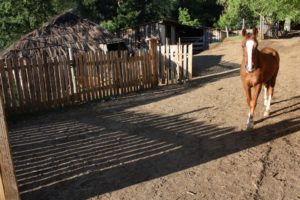 We discovered a unique viewpoint at a height of about 700 meters to view the lake and the volcano Villarrica. At the end of the ride we tasted Mapuche cuisine in the heart of a Mapuche traditional house. The food was katuto with honey, sopaipillas, tortilla, pebre, mermelada casera” and the traditional drink mudai. We also had the luck to dress traditional Mapuche costumes! We had a full day and a long day in preparation so we decided to sleep early. 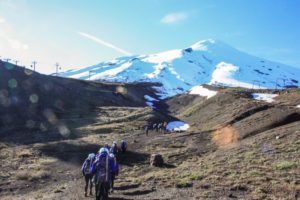 On Sunday it was a rude awakening at 6 a.m. but the tiredness gave way to stress while we discovered the full equipment… Villarrica Volcano is one of the most active volcanoes, but my first impression in the car when I saw the volcano was: “Ok it doesn’t look so hard to climb it”. Well, my purple passage was a short-course after the first ascent of 45 minutes. I had the apparition of the first breathlessness and muscle soreness, but we didn’t have time for thinking because we were already climbing again!

I had the fear of my life, struggling fiercely with a wind squall while I was on a crest –with the choice between the drop on one side and the steep slope on the other side- I couldn’t practically moved but I thought that I really can’t stay on the crest and wait the moment of loss of balance. Fortunately the mountain guide saw my distress and helped me., but my fear wasn’t finished yet! 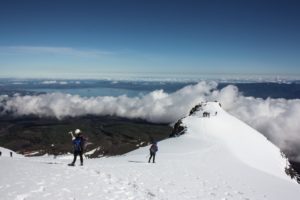 Despite thinking I’ve just spend the worst part of the ascent, I still had a long way to do…We had to put on our crampons because we began to ascend the glacier. The pressure intensifying I told myself “it’s not the moment to give up and even if I’ve never climbed a mountain –above all a glacier with crampons!- think about all people who wish to be you!” And It worked! I felt more confident with a burst of energy. 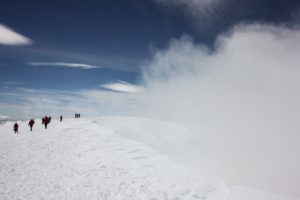 Twenty minutes before the top of the volcano, some of my friends were just about to cracking up, but so close to the goal it was impossible to give up. I didn’t feel pain or myasthenia because my mentality was stronger than the dolor. We successfully achieved at the summit of the volcano at an altitude of 2,847m. From the snow-covered summit we saw (and could smell) the volcanic activity and had a panoramic view of Pucón and its surroundings, from the height you could see volcanoes, rivers, lakes and mountains. 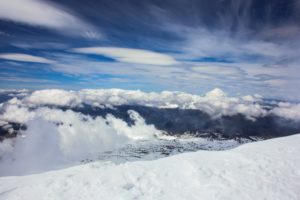 I was lost in a daydream when guides told us that we had to go down. This is when I discovered the difficulty of the way down, face to the dizzy slope. But I wasn’t done with my duties, the funniest part was coming. In a patch of fog we had to go down sliding in the snow with a special protection for our pants (and for our buttock muscles of course). A friend of mine stayed alone few minutes (but certainly the longest minutes of her life) in the snow at the back of beyond, without seeing anyone; another friend got the wrong “slide way” and fell in a small hole, but anyway we were safe and laughs prevailed over the falls.

We arrived at the hostel exhausted but so proud of our ascent, which is no mean feat, and recalling our day with a beer of friendship -also to crown our sporting achievement!