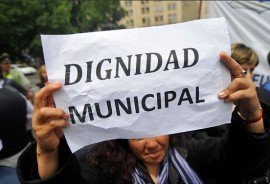 Santiago – Workers of the Municipality of Santiago functionaries began a strike to protest the government’s action against the labor and wage demands requested by officials, on time, on increasing pension and re -casting of municipal plants. The strike is a continuation of the national paro, which the government has claimed as “illegal”.

The strike includes any addresses of the corporation, including the maintenance department, grooming, general inspection, emergency, and various administrative departments within the municipality of Santiago.

In this regard, the leader of the Association of Municipal of Santiago and a spokesman for the Union of Municipal Employees of Chile (UFEMUCH), Jose Escobar, said that the government’s offer on the approval of the Management Improvement Program will not guarantee better conditions and wages for workers.

In that vein, the leader emphasized the need for the executive for a real solution to the pension increase because of the large differences among officials is generating.

In detail, the leader of the Municipal Employees of Santiago, Jose Escobar, accused the government of not accepting the request which represents more than 10,000 employees across the country.

About 2,500 workers of the Municipality of Santiago began the paralysis in all its divisions, this, in protest to offers provided by Executive unsatisfactory.

As a result, a group of municipal officials protested on Wednesday disrupting traffic at the intersection of Alameda with Las Rejes. Within minutes, the busy intersection was clear and sometimes a group of protesters approached cut traffic situation that was observed at all times by the police.

Even so, with all the municipality officials warned that the strike will continue until the government for what corresponds to their demands.

The municipal workers strike has caused chaos throughout the country, with a huge rubbish buildup in Valparaíso, regular municipal activities ceased and changes made to the football schedule, with games for both Santiago Wanderers and Everton being moved to Santiago.

The municipal workers will march today, Thursday, with no end in sight for the national strike.

This website uses cookies to improve your experience while you navigate through the website. Out of these, the cookies that are categorized as necessary are stored on your browser as they are essential for the working of basic functionalities of the website. We also use third-party cookies that help us analyze and understand how you use this website. These cookies will be stored in your browser only with your consent. You also have the option to opt-out of these cookies. But opting out of some of these cookies may affect your browsing experience.
Necessary Always Enabled
Necessary cookies are absolutely essential for the website to function properly. This category only includes cookies that ensures basic functionalities and security features of the website. These cookies do not store any personal information.
Non-necessary
Any cookies that may not be particularly necessary for the website to function and is used specifically to collect user personal data via analytics, ads, other embedded contents are termed as non-necessary cookies. It is mandatory to procure user consent prior to running these cookies on your website.
SAVE & ACCEPT